Now and then I want to output some ANSI color escape codes from software I write, and I always end up doing some trial-and-error to figure out the exact codes I want. Sometimes it’s overkill to add a dependency on an existing library that already deals with it, or the language I am using does not have one.

There are a lot of listings of the ANSI color codes out there, but I couldn’t find one that matches the actual codes with the resulting effect in a visual way. Even the Wikipedia article has a colored table with the actual colors, but I have to lookup manually which code combination produces which color.

So I spent a few minutes to write a shell script that prints all useful combinations, formatted with themselves. This way I can quickly figure out which exact code I want to achieve the desired effect. 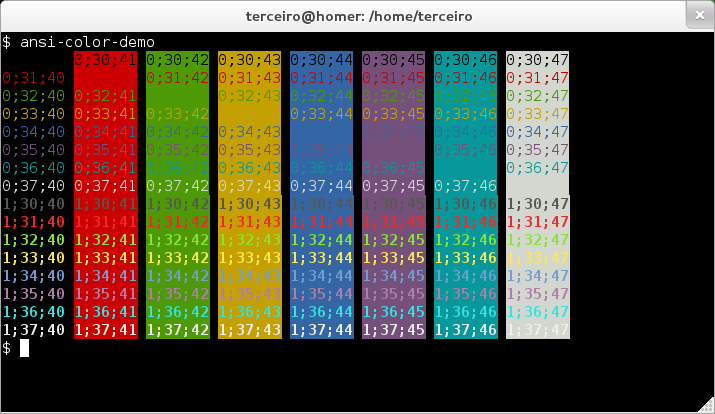 The code for now is very simple:

Is there a package in Debian that already does that? Would people find it useful to have this packaged?

update: it turns out you can find some similar stuff on google images. It was a quick and fun hack, though.

update 2: Replacing echo -n with printf makes the script work independently if /bin/sh is bash or dash. Thanks to cocci for pointing that out.