Day 3 was again a full of useful work. Since the beginning of the sprint, we were able to fix more than 50 FTBFS¹ bugs, alongside general quality improvements in the packages.

¹ in the Debian jargon, FTBFS means that a package “fails to build from source”, which in Debian is a critical bug because users need to be able to produce binary packages from their source code to fully exercise the free software principles.

An important milestone that was also achieved on day 3 was the upload of ruby-defaults 1:2.3.0+1, making ruby2.3 the new default version of Ruby. That is the version that will shipped in the next Debian release, codenamed stretch. This is the culmination of a joint effort between the Ruby team and Debian Release Team that involves rebuilding a little more than 130 packages that use the Ruby C API to make sure everything will just work on upgrades, both from the previous stable release, and from earlier snapshots of the current development release.

Another small change that will have a big impact for Debian and for free software was an improvement to gem2deb that fixes a reproducibility issue in Ruby packages and will help currently more than 100 Ruby packages become reproducible.

The full list of items that have been worked on is this:

The day ended at Outback, where we had an amount of beer that led us to formulate what we will now call the One-Sided Dinner Booth Problem. 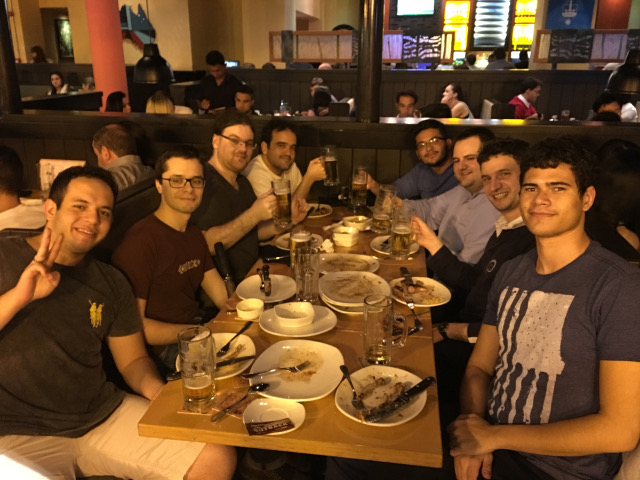 In a party arranged like above, when the people closest to wall need to go alleviate themselves of some beer, you basically have to perform a removal from the bottom of a stack, which requires popping all the elements at the top. When they come back, you have to options:

The One-Sided Dinner Booth Problem is finding the optimal data structure and algorithm for this situation. It is postulated that this is an NP-complete problem, and that only probabilistic solutions are cost-effective.