As the day 4 of the Debian Ruby team sprint in Curitiba unfolded, we have now fixed a total of more than 70 build failure bugs, managed to almost finish the Ruby 2.3 transition to be good to migrate into testing, and bootstrapped some documentation that will help new contributors get up to speed with Ruby packaging faster.

We have also requested the removal of several packages that are either severely outdated, abandoned upstream, beyond repair, utterly wrong, or in some cases, all of the above.

The full list of work items finished yesterday is:

We also managed to flirt with 2 capital sins. For those who care about these things, which I don’t (but I still care about you), I guess 2 out of 7 still means we are good? :-)

I few people that I will not name complained that they hadn’t had enough steak on the previous night, so we set out to visit a traditional all-you-can-eat Brazilian steakhouse (“churrascaria”). I made a reservation at Jardins Grill and there you have gluttony. I am pretty sure that “not enough steak” wasn’t an issue last night. You can see how happy, despite being full to almost the point of being sick, everyone was. 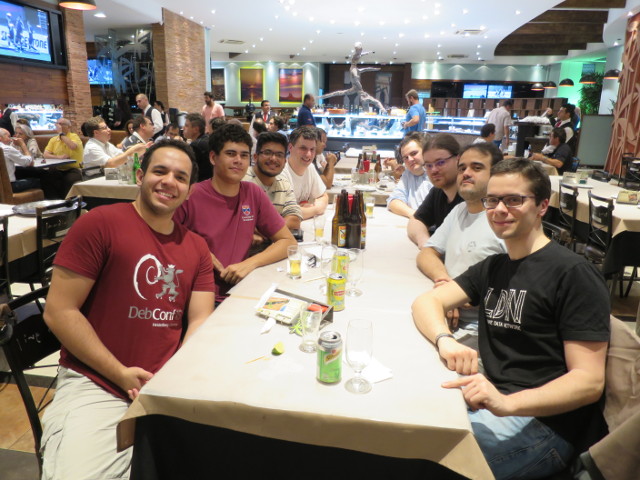 A disjunct set of people, who I will also not name, were very disappointed to find out that the ruby-tinder package has absolutely nothing to do with Tinder but were still very active on the later. Maybe Friday night we will have to split the group into a lust-free family party and a Tinder party.